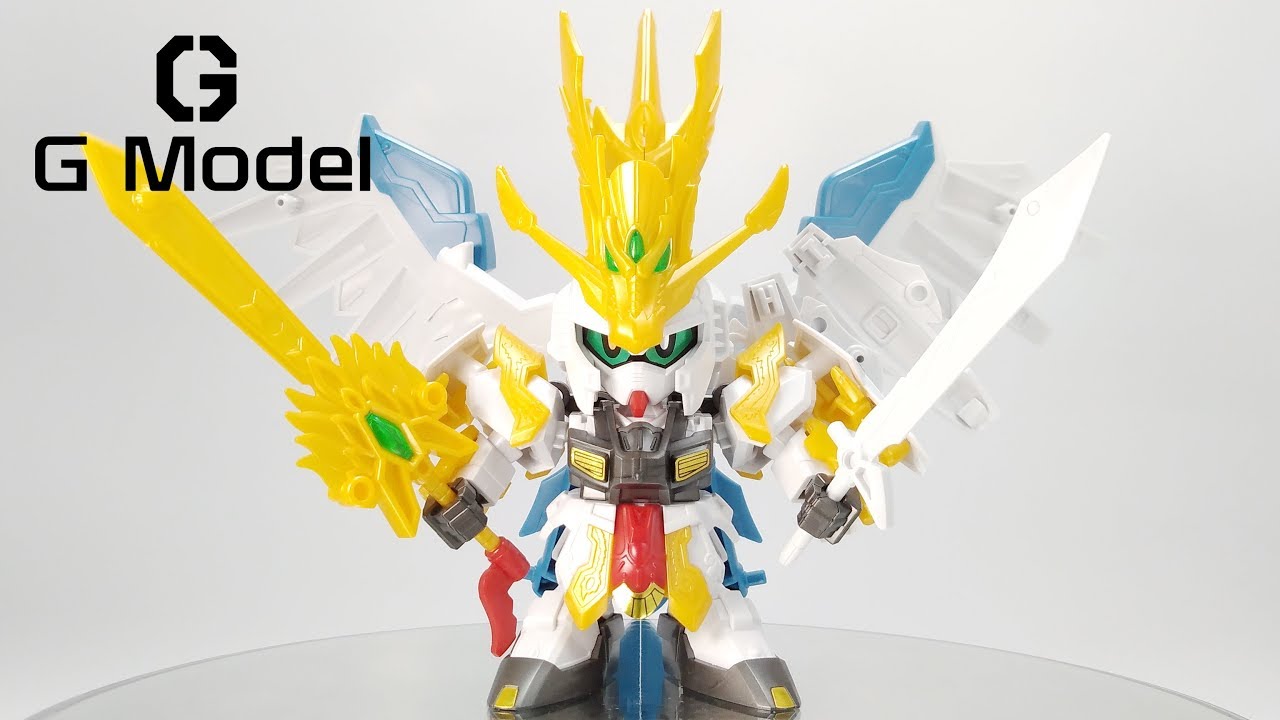 Just when the world was close to reviving itself after a devastating war, a deadly epidemic known as the 'Etiolation Trinity' begins to emerge. Said epidemic drives Mobile Civilians mad and turns them into mindless berserkers, forcing survivors to hide themselves in fortified cities, dividing the world into three countries; Shu Area, Wei Area, and Wu Area. Three warriors Liu Bei Unicorn Gundam, Guan Yu Nu Gundam and Zhang Fei God Gundam meet each other and decide to work together to save the world.

Like BB Senshi Sangokuden, Sangoku Soketsuden derives on Romance of the Three Kingdoms for its setting and characters, however the two works have nothing to do with each other. 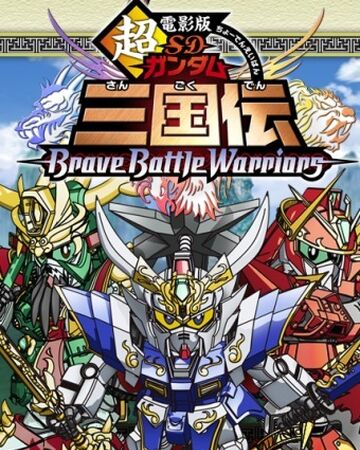 The net anime started airing on July 26, 2019, and ended on March 25, 2021. It was directed by Takahiro Ikezoe (Sword Gai: The Animation, Show by Rock!!), and each episode originally had a schedule of releasing on 'the 4th Friday of every month', before it got delayed for a year presumably to avoid any connection with theCOVID-19 Pandemic outbreaking at the time. It returned on March 18, 2021, with the last two episodes airing the week after.

There's also two comic series, both released in April 2019 and available on the official website. One is titled 'SD Gundam World Sangoku Soketsuden: Soshoki' (Drawn by Luk Mo Shek and launched on April 10. Also serialized in Explorer Publishing's monthly Hong Kong magazine Lucky, and releases new chapters on 'every 10th of the month' both on the website and as a Motion Comic.), while the other is 'SD Gundam World Sangoku Soketsuden: Enkotan' (Drawn by Naoto Tsushima, and launched on April 19. Releases new chapters 'monthly every 3rd Friday'.). Soshoki focuses on Cao Cao Wing Gundam, while Enkotan focuses on Sun Jian Gundam Astray, and Takuya Yamanaka is in charge of the story for both comics. 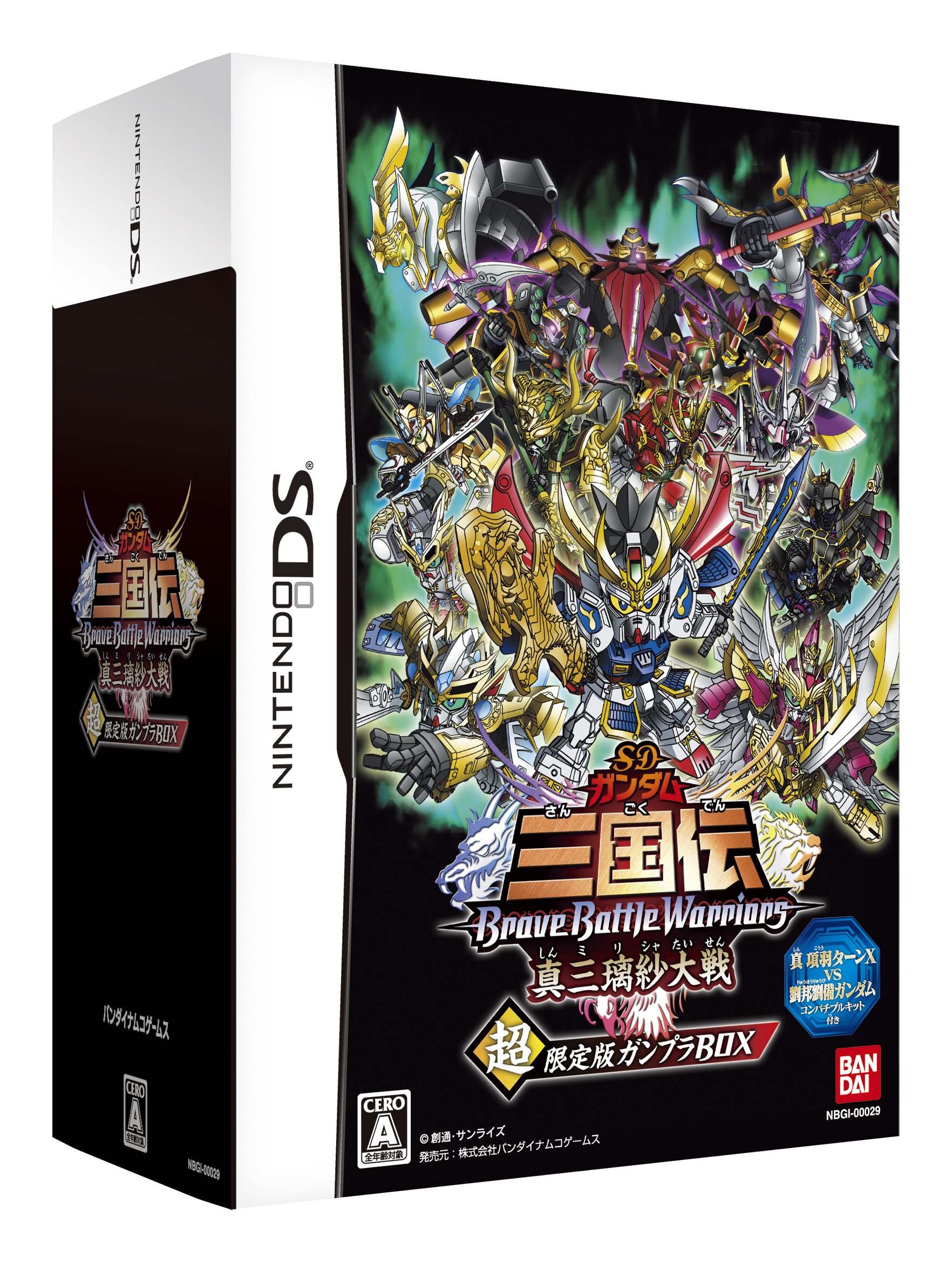 'BB Senshi' is a 20th anniversary commemorative work with the motif of 'Romance of the Three Kingdoms.' The various mobile suits[clarification needed] become 'actors (演者)' to take on the roles of various characters of Chinese literature. This further emphasizes Sangokuden as 'a performance of Romance of the Three Kingdoms by the SD Gundams.' The usual name '頑駄無 (Gundam)' used in the 'Sengokuden' series has been replaced with the katakana 'ガンダム (Gundam)'. The warring states world view closely resembles that of the 'Sengokuden' series. Certain aspects of the 'actors' taking on the roles resemble the mobile suits they were originally based on.

In 'Mirisha', the stage of 'Sangokuden', there exist 130 scrolls of historical text. In the current time they are called 'G Chronicle (G記)'. It reveals that 'Mirisha' was the country 'Abram' (from the 'Sengokuden' series) in the past and the first emperor is 'Hakuryuu Taitei' from Shin SD Sengokuden Densetsu no Daishougun Hen however this crossover was not explained in the main story. (Therefore, it could probably mean this is another 'Abram' of a parallel world like that of Musharetsuden)[1]

The series was announced to be released in a number of territories, including Japan, Korea, America and Australia.[2] However, as of 2009 only releases in Asian regions have followed. A range of related merchandise has been produced including modelling tools, snack foods and orange juice.

Whilst the series is still ongoing, a new Sengokuden model kit series has been announced to begin in July 2009. The kits will be remolded from kits released for SD Gundam Force Emaki Musharetsuden, based on previous designs which have styled these Gundams after famous historical samurai. It is currently unknown if related fiction will be produced for these kits or if they will crossover into Sangokuden.

It was the times of war in the continent of Mirisha, a time where the three kingdoms of Shou, Gou and Giga struggle for power and authority. Before the three countries become established, the rebellion of the Yellow Scarves has allowed Toutaku (Dong Zhuo) to seize control over the government, he killed Reitei (Han Ling Di) the emperor of that time and stole the 'Gyokuji (玉璽)', then promoted himself to Prime Minister spreading tyranny through the land. But a year after, the anti-Toutaku (Dong Zhuo) spirits are on the rise because of the discovery of Reitei's (Han Lin Di's) assassination, Enshuu (Shou/Shu Kingdom) was quick on gathering troops and with Sousou (Cao Cao) on board the anti-Toutaku alliance is formed. Heroes from all over gather under the anti-Toutaku banner, including Ryuubi's (Liu Bei's) Yuushu Resistance. The anti-Toutaku allied forces fought against the Toutaku (Dong Zhuo) Troops at the Korou Fortress (Hu Lao Guan) which is just outside Rakuyou.

This chapter parallels the Yellow Turban Rebellion and the Battle of Hulao Pass.

The anti-Toutaku (Dong Zhuo) alliance was disbanded after the defeat of Toutaku, the heroes each return to their homeland, expanding their territory and causing conflicts. With the death of Sonken Zephyranthes (Sun Jian), his son Sonsaku (Sun Ce) is aiming to stabilize the situation in Koto. Sousou (Cao Cao) has clashed with the Hero of Kahoku, Enshou (Yuan Shao). Ryuubi (Liu Bei) has travelled far from his homeland Yuushu to Keishuu to seek help from the famous strategist, Koumei (Kong Ming).

The battle of Red Cliff ended with the victory of Ryuubi (Liu Bei) and Sonken (Sun Quan) army, the land is split into three kingdoms – Shou, Giga and Gou. But there is no news of the missing Sousou (Cao Cao) and Ryuubi (Liu Bei). On the empty throne of Shou is the Ryuuteiken and ascending the throne of Giga is son of Sousou (Cao Cao), Souhi (Cao Pi). Souhi leads Giga to a campaign to conquer the land westwards. On the barren lands of Seiryou stands one man, Bachou (Ma Chao), burning with flames of revenge. The Giga Troops are said to be dark zombies with burning red eyes and are impossible to kill. Later in the series, the god of war, Shuu, returns.

This chapter parallels the events after the formation of the Three Kingdoms themselves.

As time gradually progress towards the Red Cliff Battle, a whistling lone warrior wanders Mirisha. The warrior bearing the same name as the past ruler of So 'Kouseki' encounters other warriors at various places, often engaging in clashes with them. And now after many struggles he finally arrive at his homeland Kishuu, the land soon to be the battlefield of the Red Cliffs and the land last known as 'So'...

The stories of the heroes not touched on in the main story, told in 12 episodes through the manga in the instruction sheet of the model kits in the series. The key character of this side story is Kouseki Turn-X (Xiang Yu).

The story is set before the Battle of the Red Cliffs and parallels the Chu–Han contention.

The manga serialization in Gundam Ace. It focus on episodes not shown in the anime's main story.

This song is featured in the promotional animation of the series. This mostly still frame animation is designed to be played at hobby shops and promotional events, introducing most of the main characters. The video was also presented in a 2007 DVD boxset of older SD Gundam animated works, as part of a feature on the history of SD Gundam. Currently this song is being used for the ending theme of the anime SD Gundam Sangokuden Brave Battle Warriors.

Kōichi Tokita drew the first chapter of the manga titled SD Gundam Sangokuden Fuuun Gouketsu Hen (SDガンダム三国伝 風雲豪傑編, SD Gundam Romance Of The Three Kingdoms: Gathering of the Heroes Chapter) which was serialized in volumes 7 to 12 of Comic Bom Bom in 2007. Kentarō Yano continues with the second chapter of the series titled SD Gundam Sangokuden Eiyuu Gekitotsu Hen (SDガンダム三国伝 英雄激突編, SD Gundam Romance Of The Three Kingdoms: Clash of the Heroes Chapter) which will serialize in Kerokero Ace from volume 2 of 2008 to volume 4 of 2009.[3]

The third chapter SD Gundam Sangokuden Senjin Kettou Hen (SDガンダム三国伝 戦神決闘編, SD Gundam Romance Of The Three Kingdoms: Battle of the War Gods Chapter) starts from Kero Kero Ace volume 5 of 2009 and will be drawn by Naoto Tsushima. With the unknown fate of Ryuubi (Liu Bei) Gundam, the lead character of the third chapter is announced to be Bachou Blue Destiny.[4]

Besides the movie, a 51-episode TV animated series was produced starting April 3, 2010.[7] Each episode is estimated to air for 15 minutes.[8]

A series of mobile phone games are made by Taiwan company, Joymaster in collaboration with Bandai-Namco:[9]

Besides the above games, Bandai-Namco has announced an upcoming game, SDガンダム三国伝 Brave Battle Warriors 真三璃紗大戦 (SD Gundam Sangokuden Brave Battle Warriors Shin Mirisha Taisen), and it is slated to be released on 2 December 2010 for the Nintendo DS handheld.[10][11]It looks to be a hack 'n' slash type of game, where the player is able to form a 3-man group, and there's over 40 playable characters.[12][13]A special promotion of the game comes with a limited edition DX boxset of Shin Kouseki Turn-X (項羽ターンX) VS Ryuuhou Ryuubi Gundam (劉邦劉備ガンダム, whose character basis is Liu Bang), never before seen model kits of the two.[14]

A teaser site has been opened,[15] and basically reiterates the revealed information thus far. The main story plot in the game goes up to the Battle of the Red Cliffs, and besides characters from the 3 factions (Shou, Giga, Gou), players can also choose to play as the other characters like the Yellow Scarves, Toutaku, Enshou, Enjyutsu, and even the generic GM/Zaku Infantry troops.[16]

Some characters from the series were confirmed to appear in the upcoming PlayStation Portable game SD Gundam G Generation World.

The focal point of the series is a range of model kits, produced as part of Bandai's BB Senshi line.[citation needed]